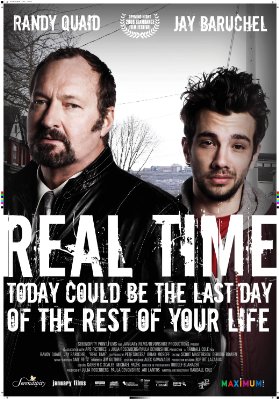 You know kids, it’s plenty easy to get jaded by the thousands of crap movies disguised as indie genius. Sometimes you get lucky and pick a good one on a fluke or sometimes you’re luck is shitty. In the case of “Real Time” written and directed by Randall Cole, starring Jay Baruchel (“Tropic Thunder”) and Randy Quaid (Brokeback Mountain) you get a solid, clean cut, rare indie gem.

Clocking in at about 77 minutes, you get a nice conversational character study with laughs provided by Baruchel and reality checks paid for by Quaid. Baruchel plays “Andy”  a gambling screw up, who owes a lot of money to the wrong people. Quaid plays “Reuben” ,a hit man ,who finds Andy at 1:47pm on a weekday in a shitty part of Canada and let’s him know that unless he pays up his excessive debt he will die by 3:00pm. The movie plays out in real time per the title and what Reuben wants above all else, is for Andy to spend the last hour of his life reflecting and revisiting any worthwhile joys he experienced in this small shit town.

You’ll think you’ve guess the ending in the first 10 minutes but more than likely you’ll be wrong. Take care to enjoy Baruchel’s comedic timing and effective dramatic scenes and then drink up Quaid’s Aussie accent and pseudo James Gandolfini-esque spirit.Don’t rush ahead for the ending and you’ll find that this little film won’t disappoint. Danger approved.