For your Consideration: “Land of the Lost”

I know that by now pretty much everyone in America has written off Land of the Lost as the first real flop of the summer, monetarily you may be correct but in actuality you are wrong.  I’ve seen “Land of the Lost” twice theatrically and I’d call it the funniest movie of the summer thus far.

Albeit if you are not a fan of Will Ferrell this could be a tough pill to swallow, well don’t be a tight ass and  allow the sweet comedic executions of  Danny McBride to change your mind. I’ll stop trying to sell you on it in such a political way and speak on the plot for a second.

Dr. Rick Marshall, Ferrell, has become the ass of the quantum physics world because of his wild alternative universe beliefs. He is tracked down by a young ambitious scientist, Holly, who urges him to finish building a device that would allow him to time travel.

After a food coma they hit the road to find the best place from which to test their device and that’s how they come upon Will Stanton, played by the incomparable Danny McBride, a redneck who runs the road side attraction where the time travel device works best. At a certain point in the cave of the roadside attraction the device comes ot life and the trio are propelled into a parallel universe where they meet Chaka,Lonely Island’s Jorma Taccone, a primate king who becomes a part of their motley crew. Then it is on. Full steam ahead. Some amazing unexpected gags and tear inducing laughter follows. I won’t give anything away because I am on an Obama like crusade to redeem this movie and I need your help. Enough pandering, the moral of the story is that you will miss out if you skip this movie. Do you like to laugh? Well what the hell are you waiting for?

Please don’t watch “Year One” it will be a grave mistake, I was there on Sunday and this movie is the more superior of the 2. Danny McBride and Will Ferrell possess more chemistry in their pinky toes than Michael Cera and Jack Black have in their matted unoriginal wigs.

F^%$ Peter Travers and all the Anti-Ferrell/Sandler critics who need explanations for their comedy. Those guys have been entertaining me since I was a kid. I don’t need the constant reminer of the deteriorating world around me, sometimes I need a nicely executed dick joke or a redneck prat to remind me that life is as simple and  funny as it is ridiculous and petty. Watch this movie for the 5 moments when your eyes well with tears from watching them commit to  some oddball behavior in their ridiculous awespiring adventures. Here’s a pic of my McBride for the road: 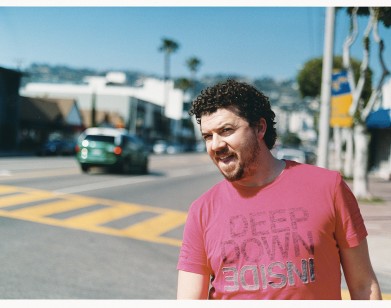 I love movies/writing/cake.* I hope you enjoy my superfluous rants and urban observations. *Order subject to change depending on the day of the week.
View all posts by Danger Bowie »