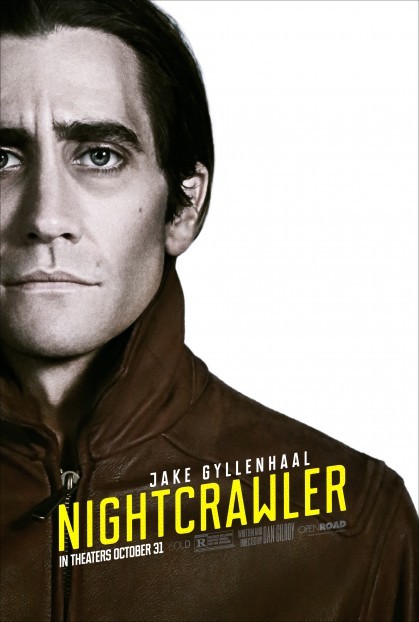 I watched Nightcrawler at 11am on Halloween morning and I sit here, three days later on Monday night, still thinking about Jake Gyllenhaal’s vicious characterization of antagonist/protagonist, Louis Bloom. Aside from Jake delivering, what I think, is the performance of his career, the movie is a beautifully shot, sick love-letter to the greater city of Los Angeles. As a native, I was thrilled to see some well-known spots (Dinah’s!) and freeways (105!) showcased under the brilliant cinematography of Jake Gyllenhaal’s real life godfather, Robert Elswit (who is also the DP of the upcoming and highly anticipated, Inherent Vice). As a jaded Los Angeles native, I have never seen my city presented in such a bizarre and sexy manner.

Nightcrawler tells the story of Lou Bloom, a late twenties, sweet-talking yet mildly threatening, gaunt, poster-child for entrepreneurship in the digital age. Lou is well-read and forever waiting for the opportunity to make the proper pitch or sell a compliment. We watch with baited breath as Lou plots, devises, steals, and manipulates his way to get any and everything he wants as Gyllenhaal delivers some of the most memorable lines of evil dialogue with the scariest twinkle in his bulging eyes. I don’t think it’s always called for to pull a Christian Bale but the 30lb weight loss that Gyllenhaal pulls off completely serves the character and the performance.

You wait tensely in the audience for the invisible leash, that holds Bloom back from destroying everyone, to snap. In the midst of all the chaos, there is a sick dark humor that lends itself to nearly every scene, including one of the most soul piercing scenes, namely the ones with Rene Russo, in a comeback role as the desperate News Director in a fledgling time slot. Hey Hollywood- Russo still has it and needs more roles. Enough with the age obsession, I want to see some more seasoned actresses holding their own.

After spending so many years sitting on the proverbial fence about Gyllenhaal’s career path, I am so happy that I decided to give Nightcrawler a shot. It is a return to glory from the fantastic actor who gave us such memorable characters as Donnie Darko, Jack Twist (Brokeback Mountain), Detective Loki (Prisoners), and Anthony Swofford (Jarhead). I only hope that when award season rears its head, Gyllenhaal makes off with a top prize so that more movies like Nightcrawler can be made.