Thank God for the fall tv season. Just as we were all preparing the noose from having to endure  a summer of “Wipeout”, “VH1’s Daisy of Love” and whatever vile MTV had going, premium television has interceded with yet another fantastic series. Enter HBO’s newest comedy half hour series , “Bored to Death”. Written for the screen by Jonathan Ames (author of several funny novels you should have read already), “Bored..” tells the semi-autobiographical story of a  writer named Jonathan Ames, who fresh off a break up, decides to use Craigslist.org as a comedic plot device to cure himself of writer’s block and a broken heart. 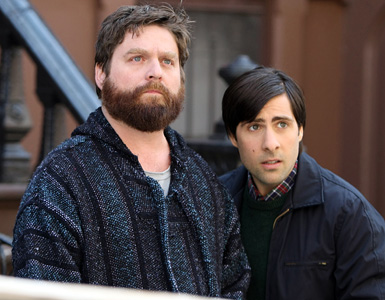 With a maybe minor addiction to pot and white wine Ames manages to get himself into one hilarious ordeal after another. Schwartzman makes a magnificent transition from the big screen with the help of his supporting cast. Zach Galifianakis plays Ray, Jonathan’s comic book illustrating pal who’s comprised of endless quirks and quotables. In case you hadn’t noticed we are living in the year of Zach Galifianakis and this show is no exception. Ted Danson is another wonderful addition to the cast, playing Ames’magazine editor who has a penchant for pot and Viagra. Snark, witticisms, and a little of the morose allowed me to thoroughly enjoyed  29 and a half minutes of this show.  It’ s becoming increasingly clear that the execs of premium cable have their fingers on the pulse. They deal in edginess, something that none of these “reality tv” shows can replicate. A round of applause for Showtime and HBO for keeping it real.