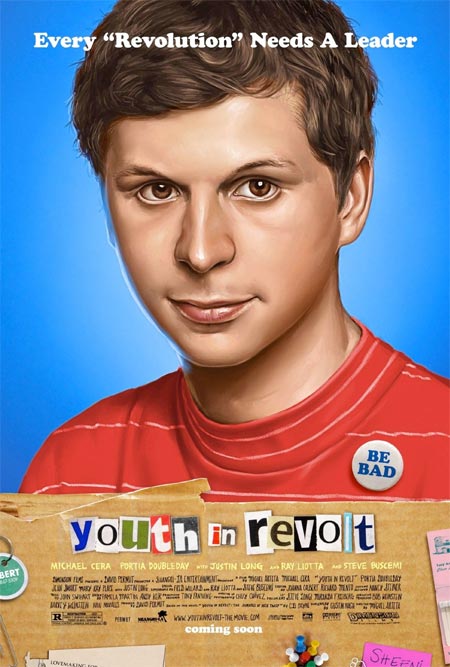 Youth in Revolt by C.D. Payne has been one of my favorite books since I could still be considered a youth. The book serves as a tome for teens and some grown ups who are fighting against the odds of growing pains , frustrations, and learning to deal with the opposite sex. Plenty of tomfoolery ensues, homelessness, bait and switch, dressing up in drag to escape authorities, step parents, and a camping trip.

The book has now been adapted into a movie starring Superbad’s Michael Cera and Steve Buscemi. I am excited and scared all at once that they could possibly have ruined a book that I cherish so much, I reread it twice every year. Especially after Sunday’s viewing of this “treasure”: 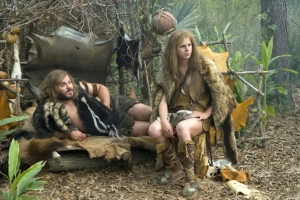 I’m almost scared to go to any theater for the remainder of the summer after watching “Year One”. No matter what Cera will be given the opportunity to redeem himself as I will watch “Youth In Revolt” when it’s released in the fall. BUT if they crucify one of my favorite books cinematically, Michael Cera will have to answer to me and trust me when I say I don’t take no guff.

Nacho Libre and George Michael Bluth in a movie about cavemen wandering through biblical times? Okay, if I could just have that bag of magic mushrooms back from you,writer/director Harold Ramis, then we can move on to your next pitch. That’s my reimagining of the pitch meeting for this movie.

Opening June 19th “Year One” is the story of two hunter gatherers who are essentially exiled from their village and their journey through ancient times. Described by star Jack Black as , ” a biblical comedy about the Old Testament featuring stories from the Torah told through Agnostic, sort of eyes..”

The ultra religious are going to have a field day cockblocking this movie.  I was a sceptic but after diligent research and watching the trailer 6 times in a row, I’ve decided that I am all in. Probably twice. Check out this teaser trailer and get converted.