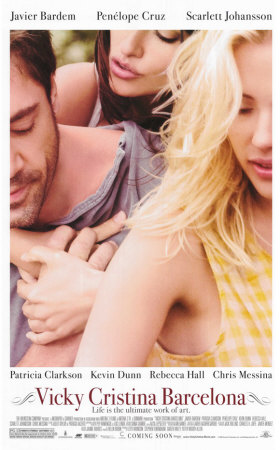 I’ll begin by saying that I am in no way a Woody Allen connoisseur,  but I’ve enjoyed the few works of his that I’ve had the chance to watch:  “Annie Hall”, “Matchpoint”, and the delightful but dark “Cassandra’s Dream”. I went into this movie with only a vague knowledge of the plot. Well  I really only knew that Scarlett Johansson and Penelope Cruz kissed each other and that Ms. Cruz’ performance scored her an Oscar nod. From the previews I had surmised that it was some time of road trip movie where 2 girls fall for the bad guy from “No Country for Old Men”. I was a little wrong.

V.C.B is a 96 minute comedy starring Scarlett Johansson-Reynolds (is anyone acknowledging that yet?) Penelope Cruz, Javier Bardem and Rebecca Hall (who is good in the movie but doesn’t even have a photo attached to her I.M.D.B page) as a horny bunch of coming of agers. ScarJo and Rebecca fly to Spain to spend the summer finding themselves. Rebecca is engaged to the perfect man, uber responsible and future minded, while ScarJo is a single, impulsive free spirit. They are shown around Spain by Rebecca’s uncle and aunt, whom they are staying with. They happen upon Bardem at an art gallery. ScarJo is immediately enthralled and finds out Bardem is a painter with a certifiably insane ex-wife and more charm than a Blow Pop. They  encounter each other after the art show at a local restaurant and Bardem invites the 2 ladies to an island to eat drink and make love. Temptation is offered and partially pursued, Penelope enters the picture and lights a firecracker on the screen. Her performance, a pertinent one to this film, was not in my opinion the best supporting female role of 2008. That being said, this movie is a solidly entertaining, filled with charm, variety and a cast that is fit to captivate even a non believer. I wouldn’t put Vicki Cristina Barcelona in your top slot but it has definitely earned a space in your Netflix queue.